The A/B Test is a technique used by marketing and communication teams to optimize the content of a campaign. It consists of testing different versions of a campaign to see which one is the best.

The indigitall platform offers a 'intelligent' version based on Machine Learning of this functionality so that this process is very simple and comfortable, so that you can use this A / B test technique regularly in your day to day day, and in this way you can optimize your campaigns based on real data of user response.

Artificial Intelligence to attract customers. Use our algorithms to increase sales by improving communication with your audience. Explore all benefits here!

The creation of each notification is the same as when you create a new campaign.

On the menu, choose the Campaigns/Push A/B Test tab.

The method we use is known as Multi Armed Bandit testing, MBA, inspired by the algorithm of Tompson Sampling.

While A/B tests with manual send are based on exploration, collecting data to see which is the best version and making a decision, MBAs are designed for exploitation, showing the version that seems best while testing continues .

Our algorithm progressively and automatically sends one of the versions to all devices. During the first hour we will make four shipments with all the versions and thus be able to analyze which one seems better. From the second hour every fifteen minutes and depending on the success of the versions, the one with the highest conversion rate will be sent to more users.

The longer the test lasts, the better the math model will learn and send the most successful version to more devices. Notifications will be sent in a sale of 1 to 7 days in a constant and gradual way in daytime, depending on the number of total devices and hourly filters. 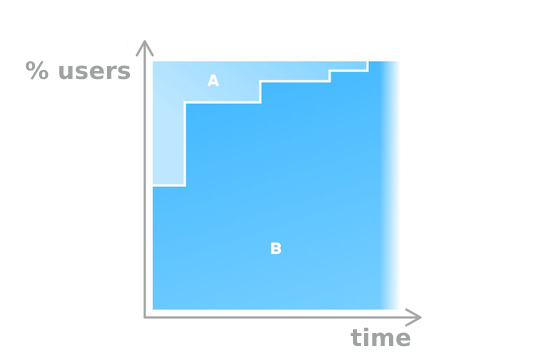 By clicking on the statistics button in the section Campaign> Push Test A/B, you will be able to check the notifications sent and how many have been clicked by each version and device : web, android, iOS as the total.

On the left is the detail by campaign and in the last line the total of the campaign:

On the right is the total for the campaign:

When clicking on a version, a pop-up window appears with the details for each device (web, android, iOS) and the total CTR (Click Through Rate), the number of notifications clicked among those received.

Status of an A/B Test

Created tests can be in one of these states: